I do not know WHY this pattern has taken me ages to put together! Well, ok, I do know: first of all, it’s a scarf. I love scarves, but I do not love knitting scarves. They are long and incredibly repetitive, and they seem to take much longer than they should to complete. I don’t fear them as I do socks, but they just aren’t my favorite thing. So it took me a while to complete the test knit. (Shhhh, don’t tell anyone, but I made my mom knit the second test knit, because I couldn’t stomach another go at it!!) And second, the inner cable pattern is lonnnnnggggg…52 rows long. And I had to chart and write out several different versions of it, for the scarf and various panels of the hood. And then I had to check each row of the written instructions against each row of the charts, stitch by stitch. This is, of course, the tech-editing norm for a decent pattern. But it’s also laborious, and I put it off for quite a while. But now, it is finally, FINALLY done, and the Bardsea Hooded Scarf pattern is up on Ravelry! Whew!! 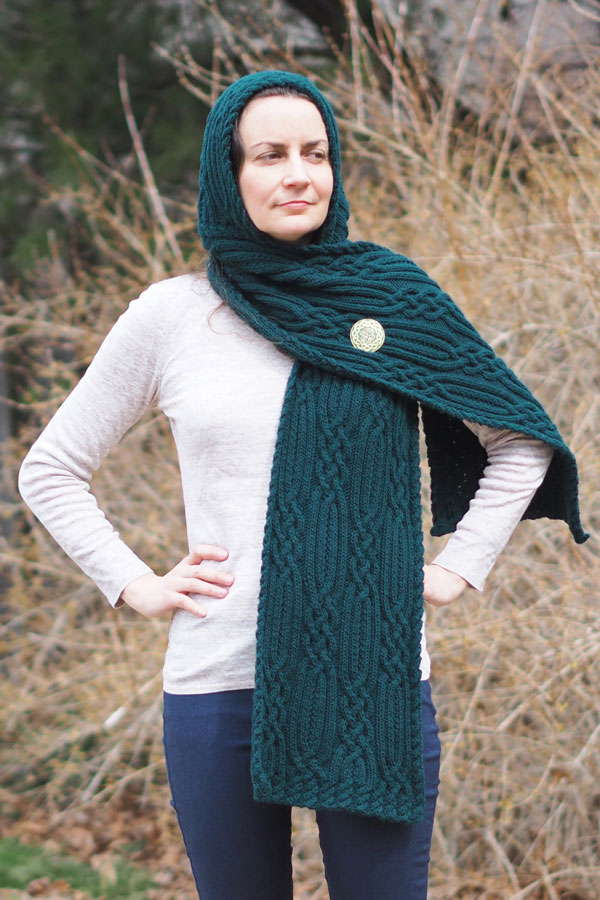 Alright, so this scarf pattern has a bit of a story behind it. I wanted to create an accessory garment with both a traditional and a vintage feel to it. Something a bit different from the norm. I have a simple old hooded scarf (commercially made) which I find very practical in the winter – I can put the hood up when especially cold, or push it down when all I want is a scarf. I decided it would be nice to have a more elaborate, cabled version of this garment, and I noticed that there were not too many choices on Ravelry. So I toyed around with this elongated cable pattern, and I especially liked the idea of a simple cable twist running up either side as a sort of decorative edging. I decided to call it Bardsea, which is a small coastal town in England, not far from where my brother is living at the moment. This design seemed to have a traditional elegance to it which captures the essence of the coastal villages in northwest UK. 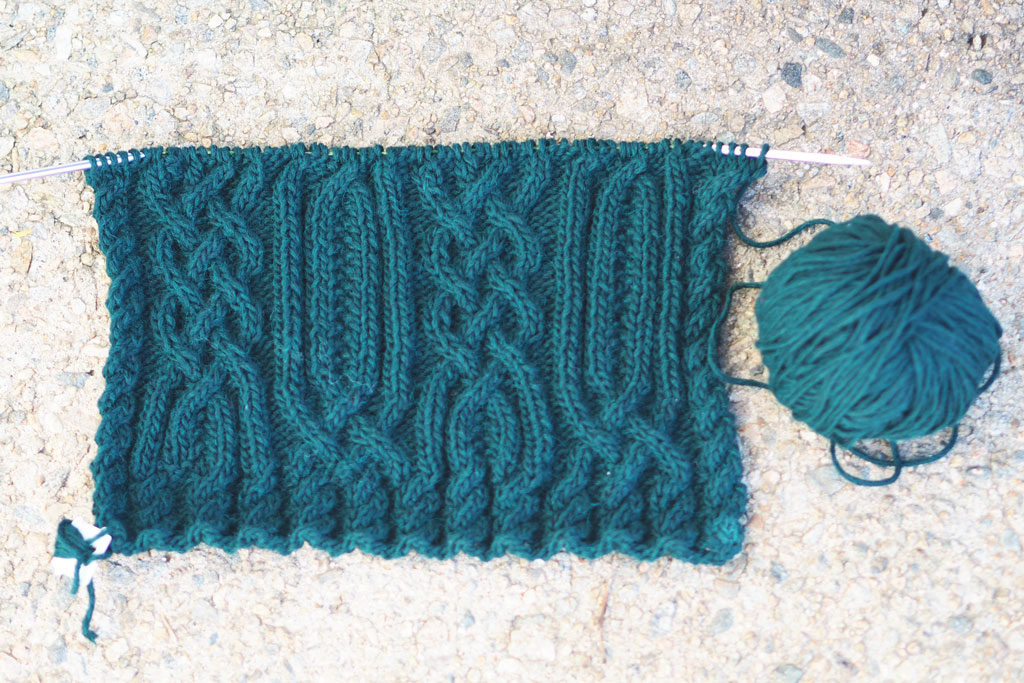 I dug this absolutely glorious yarn out of my stash – it is Reynolds Destiny, a 50% Alpaca 50% Cotton blend in a forest green Aran weight and, very sadly, discontinued. I love this yarn so much. The fiber blend makes for an extremely smooth yarn with beautiful drape and a bit of shine. It is incredibly soft, not picky, very warm…I can think of a million designs in which I could use this yarn!

Once I was happy with the cable pattern, I worked up the scarf to very generous measurements. I wanted this scarf to have enough oomph to double as a shawl and provide good coverage. 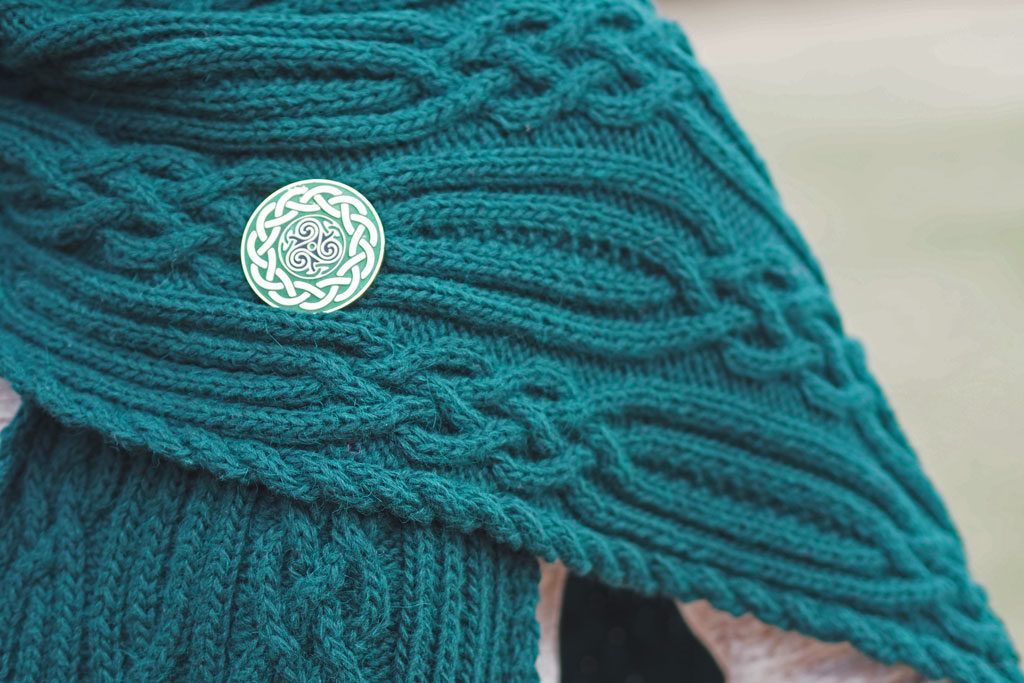 I then had to sort out the hood. I tried it one way, which didn’t work out, ripped it back out, and tried again. A simple hood worked straight with no shaping and grafted down the center crown turned out to be the best method. This method allowed for the edging to continue seamlessly around the outer hood, which tied the whole design together. 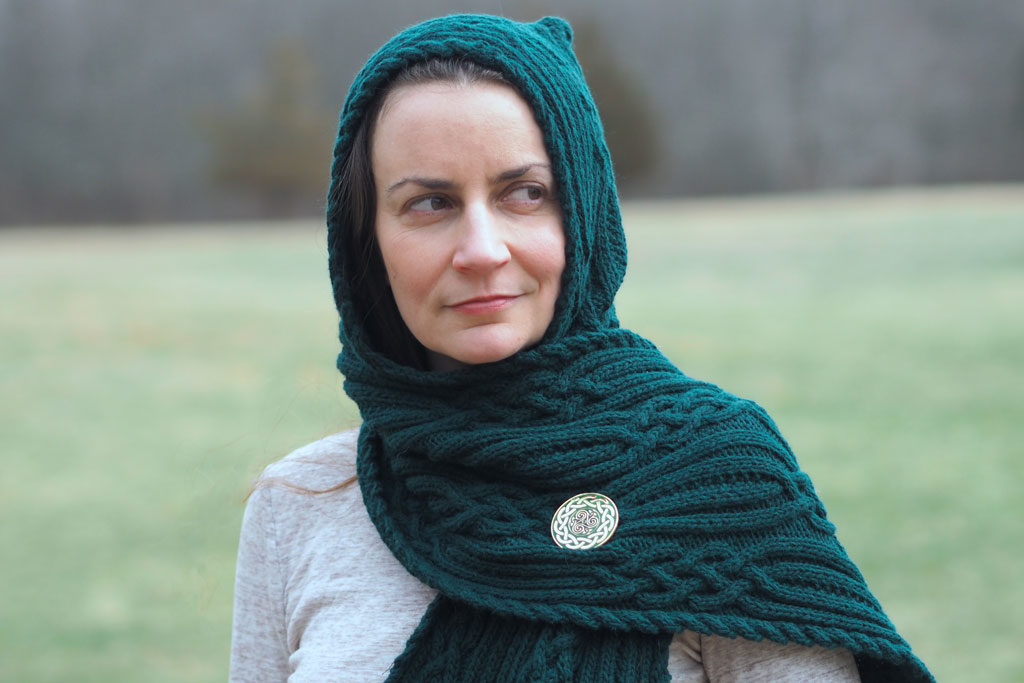 I wanted this garment to have a hoodless option as well, since the hood is added to the completed scarf and can easily be omitted from the design. Since a hooded scarf is not for everyone, this option may appeal to knitters looking for a beautiful cabled scarf design with nothing extra, and I like that the pattern gives both options. So I set my mom to work on a hoodless version, again in Reynolds Destiny, but this time in a beautiful dusty lilac. 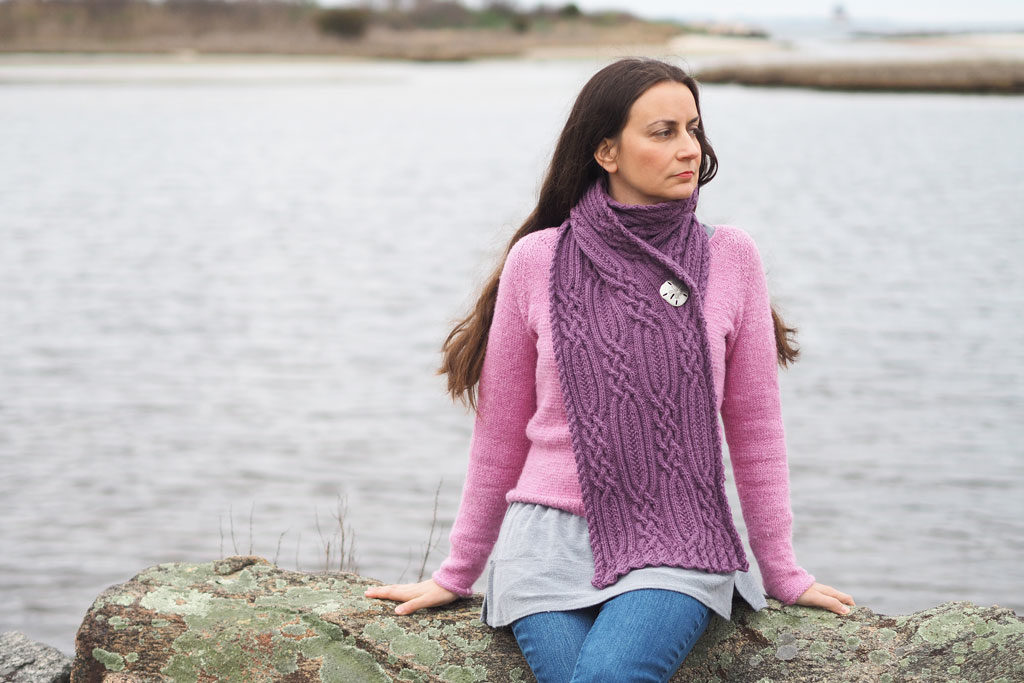 The scarf works very well on its own, and I especially love the length and width, which provide more flexibility in the way it is worn. My personal favorite method is wrapped twice around the neck and fastened with a lovely brooch. 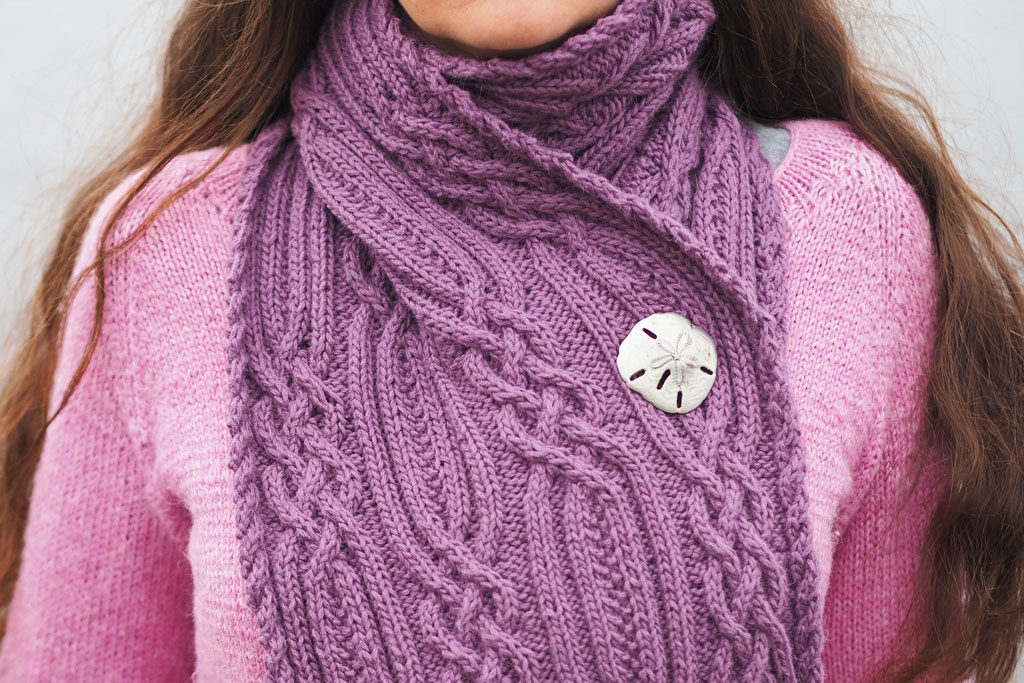 I am sad that the yarn I used for this design is no longer available for purchase. However, there are other great (and very accessible) alternatives out there, including Spud and Chloë Sweater and KnitPicks City Tweed HW. Both have a similar drape and shine to them and will work up similarly to the Destiny. 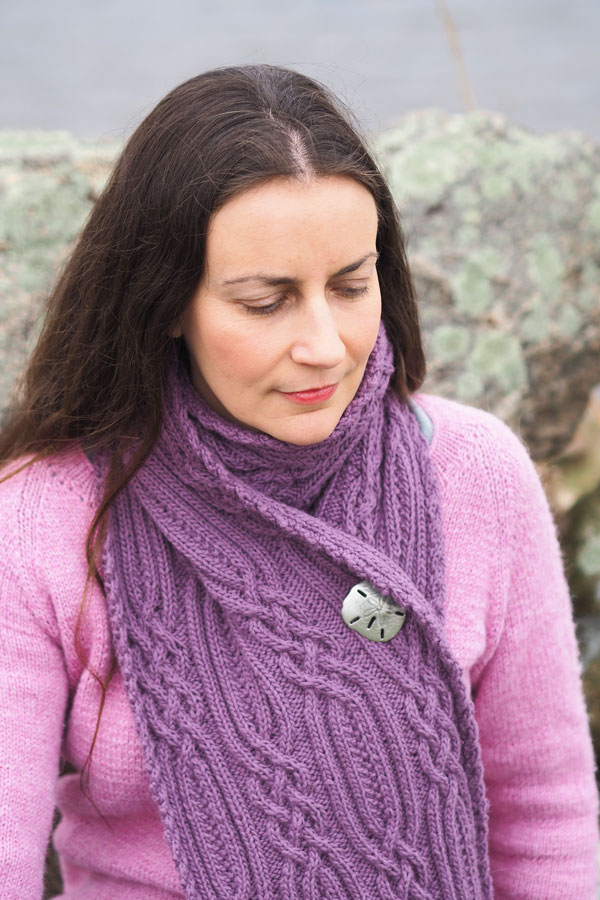 I hope you’ll enjoy the design. I have something new in the works, which will hopefully be ready for a preview in not too long!